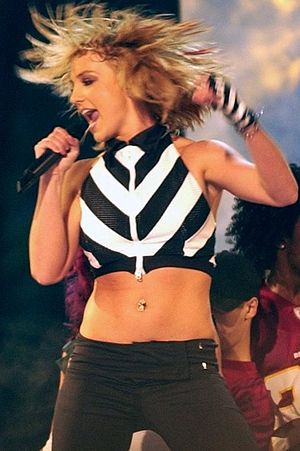 Singer Britney Spears was one of the best selling female performers of the 2000s. (Photo credit: Wikipedia)

Though the music world is full of great female singers only a few have reached the level of greatness that these giants of American pop culture have. These amazing singers, old and new have made it to the top of the list with their incredible songs and voices. Check out for the best female singers of all time whose voices spin you all over.

Taylor Swift is pretty much everyone’s sweet heart. She started composing songs at a very young age. She released her first hit “Tim McGraw,” in 2006 which sold more than 2.5 million copies. In 2008, Swift won a Grammy Award for her album Fearless. Cover Girl also identified her talent and signed her to be their model in 2010. In 2012, Forbes magazine declared as the highest paid celebrity under 30, overtaking Justin Bieber, Rihana and Lady Gaga. She has also won six American music awards. Recently she was honored with the CMA Pinnacle award for her achievements as a country singer and for her love on “country music”. Taylor attended the 2013 American awards in Los Angeles which nominated her for five awards and honored her with four awards.

Katy Perry is among the world’s greatest artists. “I kissed a girl” made it to the top of Hot 100 and was named Billboard’s 2008 Song of the summer. Perry soon earned a huge fan base with her hits like “Hot n Cold” and “Waking Up in Vegas.” “California Gurls,” became one of Kate’s greatest hits ever, making it to the top of the Hot 100 for six weeks. The music video for “Firework” has collected 336 million YouTube views and Perry was honored with Video of the Year for this great work. Kate is not only a singer but also a successful business woman launching her own perfumes. With the support of great artists like Robyn, Marina and Janelle Monae, Kate performed “Teenage Dream” at Europe, Australia, Asia, North America and many other countries. By the end of 2011, the California Dreams made the 13th biggest hit of the year generating an income of $48.8 million. Perry has also acted in a family comedy that turned out to be the biggest hit. “Wide Awake,” which was written for her 3D movie “Part of me,” won the second place on the Hot 100 and has received 2.6 million downloads till now. In 2012, she was named Billboard’s Woman of the Year.

Lady Gaga is another Rock band queen of the world after Oprah Winfrey and her power is her talent and dedication to work with which she creates amazing songs that deeply touch you. Her original name is Stefani Angelina Germanotta which is not known to many. She began her career as writing songs for other artists until Akon discovered her while she was performing a show called “Lady Gaga and the Starlight Revue.” Her single”Poker Face” and the debut album, The Fame, topped charts in all categories all over the globe. This international pop star’s debut single, “Just Dance,” became popular on radio. The song was also nominated for a Grammy Award in 2008 but it lost to Daft Punk’s “Harder, Better, Faster, Stronger,” but this didn’t stop Gaga from ranking No.1 on the mainstream pop charts in January 2009. Later she released albums “The Fame Monster” and “Born This Way.”

Robyn Rihanna Fenty popularly known as Rihanna released her first debut album, Music of the Sun, which entered the top ten of Billboard 200 and her debut single “Pon de Replay” was included in the Billboard Hot 100. With the release of her second and third albums, “A Girl Like Me” in 2006 and “Good girl Gone Bad” Rihanna became a fully fledged pop star and sex symbol. She received her first Grammy award for her debut single “Umbrella.”  Her sixth studio album “Talk That Talk” received the 2013 Grammy Award for the best music video.

This Canadian singer appeared on the music scene in 2008 with her album “Tug of War.” In 2010 she released her second album, “Curiosity,” which included “Call Me Maybe,” a tune that was positioned No.1 on the Billboard Canadian Hot 100. She was musically inspired by pop singer Natalie Imbruglia. Her video performance “The Roots” has earned her millions of fans on YouTube.

Britney Spears is one among the best pop singers of the world. She began her career in 1992 and her first debut “Baby One More Time” reached the top of the pop charts. Her album, “Oops! I Did It Again” was an instant No.1 hit on the album list, selling more than 1 million copies in the first week. Another greatest hit “My Prerogative” sold 5 million copies.

Jennifer Lynn Lopez popularly known as J.Lo, is an American pop star, actress, fashion designer and television producer. Her musical career began with her debut Latin pop album, On the 6 in June 1999. The debut single “If you had my love,” was the greatest hit. She won 2 American music awards for pop/Rock Feamle Artist and Favorite Latin Artist. So far, she has sold more than forty-eight million albums worldwide.

Brianne Walter is a freelance journalist who has been writing about mobile technology, customer relationship management and women’s health for more than a decade. These days she is busy to contributes on Social Cloud